The increasing use of social networking has brought a word of caution to the lips of many. You should consider carefully what photos of yourself you post.

This may sound easy, but a quick look at some of the walls layered with images will reveal not everyone is paying attention. A few personal examples should suffice.

I graduated high school in 1965. During my senior year my brother, then a junior, received a note in his home room with his name on it identifying him as the president of The Christian Fellowship Club. The note read: “Please have the members of your organization assemble for their Koala photograph,” and gave a date, time and place for this to occur. Koala was the name of our high school yearbook.

In those days, my brother and I shared a bedroom so it was hard for him to keep a secret. Although we collected coins and attended numismatic meetings, we were not joiners. He was not a member of any campus organization and neither was I. Nor were we affiliated with any religious group having become lapsed Catholics after our mother died nearly a decade prior.

It did occur to us, however, that we might as well show up for the appointment and invite as many of our friends along who wanted to try and brazen their way through the session. If the real Christian Fellowship Club appeared, well, we would simply disappear.

Typical attire for high school at the time was a pair of slacks, polished black wingtip shoes and dress shirt without a tie. This was Southern California chic. Hippies were just being invented, alcohol was popular and smoking dope was almost unknown, just coming into vogue. Surfers were a small clique within the larger mass of the student population and “lettermen,” guys who had earned a letter in any sport, wore their sweaters draped over the back with the arms tied around their neck. “Jocks” as they were known, occupied their own separate bench in the quad. The quad was where we went after eating lunch in the cafeteria.

Our Christian Fellowship group photo was to be shot at a specific bench in the quad.

This photo was a complete fake. However, I’m the only one who remembers that. Today, anyone who sees it thinks I sure have changed.

Thirty years later a friend who knew me as an adult said he recently met someone who went to my old high school about the same time I was there. Together they dragged out the yearbook and looked me up and, lo and behold, there was my picture as a member of The Christian Fellowship Club. Standing next to me were Tim Salisbury, Dan Riker, my brother Steve, Larry Pitman and I have no idea who the others were.

The friend who looked up this photo said, “Harry, you sure have changed.”

Well, not exactly. You see, I was never that way to begin with, except the camera doesn’t lie and neither does the cut line. We are tagged for all time as something we were not. It was a joke, plain and simple, but that’s not what the yearbook says.

Most, if not all, the people pictured were smokers and drinkers. “Pitman’s Gully” was code for our drinking hole out back of his house on the outskirts of town. We were not yet eighteen, weekend binge drinkers, rude and crude. High school was a social environment which would make or break us and no one knew what Vietnam was other than a country in Southeast Asia. But several of those in the photo would spend a good deal of time there. 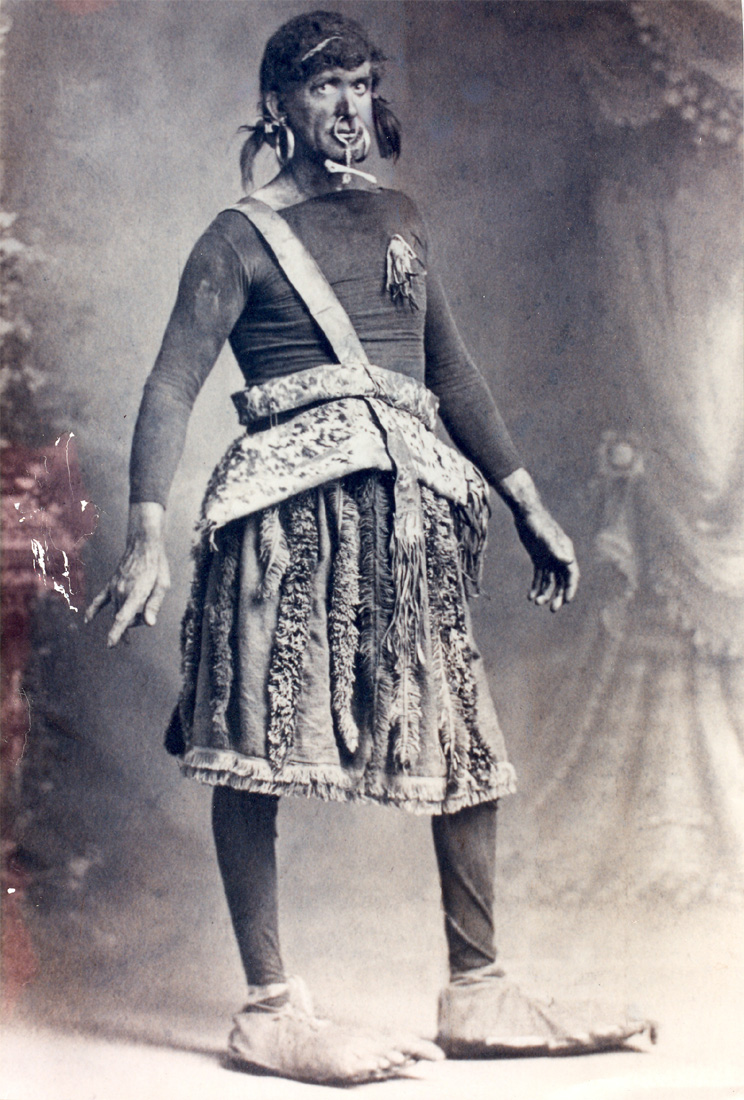 There is a photo of my Grandfather, Harry Arthur Moss, on my bookshelf. It was taken in Anna, Il, and according to the recollection of his daughter, my Aunt Mary Jo, it was probably made in the spring or summer of 1915. The image is of a man dressed like an aboriginal, but not one who ever inhabited our planet. He has a ring that appears to go through his nose, a huge loop for an earring, scruffy features with charcoal blackened cheeks and shoulder length hair tied in two rat tails. There is a wide belt traversing his waist that rises like a bandoleer over his right shoulder. His long sleeved shirt is tucked into a dress or kilt-like knee-length skirt out of which protrude his legs and his feet are wrapped in something that resembles animal pads, with what seem to be fake toes, who knows, that protrude from the open ends. Grand Dad was dressed as “The Wild Man” for a parade through town in which he was pulled in a cage made of saplings.

Everyone in the family received a copy of this absurdly dressed person for a Christmas gift one year from my brother, Steve, who thought it a huge joke. You have to look very closely at the picture on Grand Dad’s right side to notice the belts are pinned together by a safety pin.

Obviously Grand Dad had a sense of humor. Thing is, this is the only picture of my paternal forebear known to me.

I have a friend named Justin. He once explained the only photo his family has of his father as a baby shows him in a graveyard propped up on a tombstone. Seems grandmother did not like people touching her baby, coming up and chucking him under the chin and saying, “Kootchy kootchy coo.” But he was in a carriage and she still wanted to take him out for walks. So she took him to the only outdoor place she could think of where there were no pesky people: cemeteries.

Shasha (that’s her name, not Sasha) had what I consider one of the other best “Pose” stories. Her yearbook trick was somewhat like ours, only her plan was to get into as many group pictures as she could despite the fact she was not a member of any group.

The Mushroom Club stands out in her mind as the best, probably, she said, “Because I was taking shrooms at the time.”

A photo is frozen in time. It has no tone, emphasis or irony other than whatever visual cues are captured which would let a viewer know that a “joke” or “ironic comment” is being made.

This is a cautionary tale. Make of it what you will.