Our film, “The Injuries to Tim Dale,” had been accepted and was to run in the 2013 Fort Lauderdale International Film Festival. I stayed three days in St. Augustine where my narrator, Bob Bohle, lives. Then flew south to Fort Lauderdale where Ron said he would meet me at the gate.

The Fort Lauderdale airport confused and confounded Ron at every step of the way. We went in search of his car. He was in section EE and claimed to have followed the yellow line to the terminal, but was unable to take a reverse course because there were no arrows on the yellow line. At one point a stinky, noisy diesel tram came to a stop next to us just as we were asking a couple of airport personnel where the EE section was.

The guy we were asking directions from said, “Take a right.”

I said, “What do you mean, right? We’d run straight into that metal fence.”

Finally I realized he was trying to tell us to get on the tram. “Take a ride,” not “Take a right.”

Ron called himself a shit magnet. I began to believe he was.

Before the film festival opened, I went to Naples to visit Ron and Kay and the three of us played tourist. Ron drove along Highway 75 which is known as Alligator Alley. Take your index finger and point to the ground. See where the crease is on your first joint? Well, that’s Alligator Alley running from the East Coast to the West Coast of Florida straight across the Everglades.

They actually refer to themselves that way. Ron said he lives on the West Coast which to me, a natural born Californian, was funny.

The fat guy selling airboat ride tickets out the window of a wood shack had an attitude. It was contempt of tourists made obvious in his speech and action. Next to his shoulder in the window was a hand lettered sign with an arrow: “Complaint Department — 300 miles north, turn right.” That would drop you in the Atlantic. I had a minor interaction with him. I bought three tickets after he condescendingly explained the difference in price between the long and the short ride. He didn’t care if I stopped breathing.

The woman in the booth, however, was a tad friendlier.

While we waited for our number to be called, we stood near a bench at the water’s edge separated from three or four alligators by a wire fence at our feet. There were fish swimming with the gators, but none of the reptiles were interested in the colorful seafood.

He said, “She’s full of shit. She don’t know what she’s talkin’ ’bout. They’s Jack Dempseys. Not named after the fighter. A guy named Jack Dempsey dropped Cichlids (he pronounced them sicklets, but apparently he had the correct scientific classification) in the Everglades in the 60’s.” Duane told us they were “African or bull sicklets.”

Well, turns out Duane was somewhat correct. The fish are native to the Americas, from Mexico to Honduras, and are so called because in an aquarium they are aggressive and have a striking facial appearance which makes them somehow “similar” to the 1920’s boxer. However, they do not seem to be called “African” or “bull.” There is a “blue” variety. Come to think of it, maybe that’s what Duane was saying: “They’s African and blue sicklets.”

Not unlike, “Take a right.”

I knocked on the back door of the ticket booth a second time and asked if she knew a place that offered alligator sandwiches. She named a restaurant in Everglades City and volunteered there were three things on the menu might interest me: Cooter, Leg or Tail.

That would be turtle, frog or alligator. I only found gator and frog legs on the menu.

Back at the water’s edge, Ron told me an interesting tale. He said Everglades City has the peculiar distinction of having had a drug bust in the 70’s in which every male in the town was arrested.

I went and knocked at the back door again and the woman came out and I preambled with: “Mind if I ask something about local history?”

“I heard there was a drug bust in Everglades City,” and she stopped me right there with: “You get yer ass kicked you ask questions ’bout ’at.”

Apparently it’s true and they’re still miffed about it 40 years later. So I said nothing, turned around and went back to where Ron and Kay were standing.

We took an airboat with only two others on board. Another guy named Duane was our captain and he liked to gun the engine and fly over the water. He cut a sharp turn which threw water up and washed a mud flat to make it slick. Then he flew across that mud.

An airboat ride is an incredible experience. We were issued a set of earmuffs to cut down on the motor sounds, but there were no safety straps to hold us in. Florida is one of three donor states: No motorcycle helmet laws of any kind. Apparently there are no airboat seatbelt laws either. Ours was the smaller craft and Duane felt we could handle the speed — only 35 mph but it felt much faster. We rode rivulets into seemingly blind alleyways and out again, passed through branches of over hanging mangroves and did a full circle of the waterway spewing white foam in our wake.

An airboat riding the Everglades.

There was a zoo associated with the airboat rentals. You had to pay extra, but a friend who had done it years ago insisted I find an

alligator wrestler in the Everglades. We were told there was a “show,” but it was not called wrestling. Inside the pen this guy introduced himself as Duane, snuck up behind a six foot gator, sat on its back, lifted the head by the snout and pried open the jaws. Alligators cannot see what’s going on behind them, but when Duane slid his hand holding his hat in front, the gator was incredibly fast. Nearly caught that cap.

Here’s Duane approaching, sitting down on, then opening the gator’s jaws. I remind you all that PETA has no truck with me for having taken these pictures. 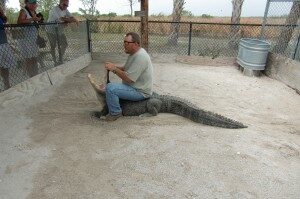 Another thing they let you do in that zoo is hold an alligator.

Yes, that’s me and the animal is probably a baby, but notice how they wrapped a big rubber band around its mouth.

Depending on how you look at it, the real estate market in Florida isn’t all that bad. Ron and Kay bought a house with about a third of an acre of land including a small but authentic swimming pool for under a hundred thousand. They were paying more in rent for a flat in San Francisco than their mortgage is now.

Ron said the property was a bank repo and the large back yard had been left to seed. He started clearing the land and planted banana trees.

Air ferns, bromeliads, grow everywhere in Southern Florida where they thrive. I spotted these plants and asked Kay to pick me some to take home. It is quite legal to mail or transport flora across state lines. I have an Australian brush cherry in my back yard. I often ship seedlings from it to relatives and friends. Although I am allowed to mail the brush cherry to any state in the country, I am not allowed to send seedlings to Australia even though that’s where it was born.

I picked a few seedlings and am sending them to Ron and Kay to plant next to their banana plantation that’s currently only two feet tall.