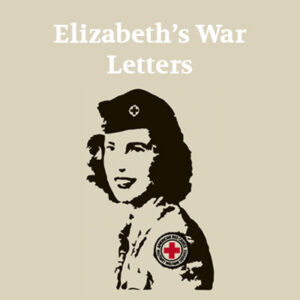 Elizabeth Donnellan received her Master of Arts degree in social work in 1941 and was hired by the Red Cross in 1943 as a social worker in service to the armed forces. She was sent to the East Coast, then to England and Europe arriving on the beaches of Normandy by August, 1944.

A budding author, Elizabeth was a typist and had access to a typewriter throughout her tour of duty. She wrote long, articulate, chatty letters describing the people, places and events of her time. A number were handwritten and most, but not all, are dated.

This is epistolary writing which has a long and well accepted literary history. The Bible contains “Epistles” by Paul, Timothy, Jude and “The Epistles of St. John.” C. S. Lewis used the form for “The Screwtape Letters.” Bram Stoker’s “Dracula,” Pierre Choderlos de Laclos’ “Les Liaisons Dangereuses” and “Doogie Howser, M. D.” are examples of the form used successfully in literature and television. Alice Walker’s “The Color Purple” uses letters to tell her story.

There is an arc to Elizabeth’s letters which only appears with a chronological reading beginning with her Red Cross stint at Walter Reed Hospital in Bethesda, Maryland. She falls in love, crosses the Atlantic Ocean where she meets friends who will be with her throughout the war, then somehow falls out of love. She travels the length of Britain and visits various countries on the Continent. Her two years in service read like the feats of a heroine in an adventure novel.

These are young people participating in war who have access to tools and can make of those tools toys for an adventure.

This book contains approximately 50 letters which were conserved by her siblings. These have been transcribed and annotated. In addition, original photographs which Elizabeth took have been discovered and are included.

Copyright 2016 by NetNovels
All rights reserved

This is a work of historical fiction. Names, characters, places, and incidents are either taken from original source material, i. e. the letters of Elizabeth Donnellan, or researched to the best of the author’s ability to compliment, expand or explain those letters.

Reproduction in any form without prior written permission is prohibited

Published in the United States of America