Elizabeth Ann Donnellan was an intelligent, good-looking, well dressed and highly educated 27-year-old when she was hired by the American Red Cross (ARC) on June 21, 1943. She became a social worker in service to the armed forces, according to her ARC employee service record.

It should be emphasized that Elizabeth was an employee, not a volunteer, earning $150 per month. She was hired because she had a Master of Arts degree from the Graduate School of Social Work at Loyola, the Jesuit Catholic University in Chicago, from which she graduated February 4, 1941.

The title of her thesis was “The Back of the Yards Neighborhood Council” which described alternative social intervention methods employed by church and neighborhood organizations operating in the notorious Chicago slaughterhouse and meat packing districts of that era. She grew up in Chicago and graduated Visitation High School in 1933, earned a Bachelor of Arts degree in Social Sciences, minor in English, June 9, 1937, from St. Xavier College.

During her approximately two-and-a-half years with ARC, Elizabeth worked in Chicago before being posted to Walter Reed Hospital in Washington, D.C. She was sent by ship overseas and on September 28, 1943 (her brother Dennis’ birthday she notes on the letter), wrote home from “somewhere in England.” She visited many parts of that country, went to Scotland, was in France by August 19, 1944 (she wrote “somewhere in France” below that date), and was in Paris two weeks after its liberation. With V E Day and the end of war in Europe, she found time to visit relatives in Ireland.

Elizabeth’s father, Stephen Donnellan, was an engineer with the Pennsylvania Rail Road and had a penchant for real estate speculation. He married Ellen Davin who listed her occupation on Elizabeth’s birth certificate as housewife. They were both born in Ireland, he in County Clare and she in County Laois. They met in America, probably in Chicago. They had seven offspring and Elizabeth was their fifth child. Stephen died in 1939. This was an Irish Catholic family where men may or may not, but women were expected to attend mass and Elizabeth frequently mentions doing so in her letters, sometimes more than once a day.

There are two birth certificates for Elizabeth. The first was filed April 4, 1916, and identified her birth place as Cook County, city of Chicago, but incredibly failed to state a birth date. A “Supplemental Report of Birth,” dated July 14, says she was born March 13. At the time of birth, her mother was 34, her father, 43.

In 2000 the Red Cross responded to inquiries about Elizabeth’s period of employment and provided several documents. Their records put her dates of service as being between June 21, 1943, and January 1, 1946.

Her actual service period may have begun in June, but she was examined by Dr. Frank Kraft the month before, on May 25, 1943, as described in “Red Cross Doctor Exam.” A Metropolitan Life Insurance Company policy was issued to her mother by the Red Cross for $2,000 on September 12, 1943. 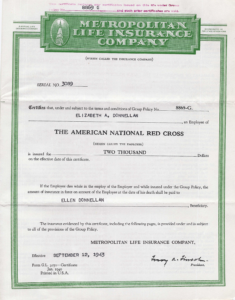 Elizabeth’s final date of service is somewhat questionable because a combination hand written and type written document, called “Red Cross Leave Record,” states she had 30 day’s leave due and in long hand that she was “Returning USA.” One notation states “Reported 10/7/45 Vaughn Gen Hosp 10/9” which was in Hines, Illinois, and appears to suggest she took nearly the entire month off: “24 da sick leave 10/8.” This is followed by her earnings and says “last sal. pay 9-6” and her “Date of Clearance: 10-6-45.”

Elizabeth had two brothers in service. Stephen, three years older, was a mechanic who seems to have gotten himself in some sort of trouble with the Army. He is suspected of going AWOL, however none of her correspondents seem to know for certain and Elizabeth defends his ability to fly while on furlough which he would not be allowed to do if he truly had been reprimanded. None of Steve’s letters, which Elizabeth laments were few and far between anyway, have survived.

Her brother Dennis was three years younger and a medic with the 84th Infantry. Dennis does write home and describes a number of incidents while stationed Stateside. He was in the Battle of the Bulge and earned the Purple Heart and a Bronze Star. A number of his letters have been conserved.

Elizabeth was nothing if not adventurous. During less than a year in England she visited London frequently, traveled to Taunton and Salisbury which she described in her letter dated November 23, 1943, Exeter (2-10-44), Bournemouth (3-2-44), Glasgow in Scotland (3-20-44), rode her bike to Brixam and contemplated Ireland although she did not get there until 1945 and Victory in Europe.

She sought out culture. Her letters tell of going to the theater, seeing movies and reading books as well as mentioning magazines. In one photo she posed with two friends in front of Anne Hathaway’s house in the village of Shottery, Warwickshire, about 1.7 miles from Stratford-upon-Avon. She saw “Richard III” in the Memorial Theatre there.

She was a follower of fashion, well versed in couture. Her letters describe arcane apparel and materials, various brands and styles of make up and nail polish and give the general impression she kept up appearances even in the most unglamorous of circumstances. For her, Paris was the apotheosis of style and culture.

She prized resourcefulness and knew her way around a sewing machine. Several times she recounts triumphs of acquiring them and using them to furnish rooms with curtains, mend clothing and turn the men who knew how to use the machines into surgical ward assistants.

And she liked to pamper herself. The Donnellans were not a wealthy family, but Elizabeth appreciated what wealth could buy. Her visits to London are punctuated with mention of the Claridge luxury hotel, probably the same one on Brook Street that is there today. When in Paris, her description of trying on fashionable dresses while still wearing fatigues is priceless. And who but Elizabeth would assume that the Ritz would have accommodations for two when all the brass in the entire U. S. Army wanted to stay there?

Elizabeth was a typist and her position with the Red Cross gave her access to typewriters. She wrote long, articulate, chatty letters describing the people, places and events of her time. A number were handwritten and most, but not all, are dated. The letters were often made in five copies, an original and four carbons although she claimed six carbons in her October 14, 1944, letter which would indicate seven copies, not without typographical errors. In at least one case, Elizabeth put the carbon in backwards and suggested in a note at the bottom the reader might hold it up to a light, she was not going to re-type the whole thing. And these carbons were often personalized. In the space normally used for a salutation, as in the November 14, 1943, letter for example, the typewritten “Dear Sal Bernard, and Judy —” is clear and sharp, in black typewriter ribbon in contrast to the rest of the letter which is fuzzy carbon blue indicating that page was run through the platen twice. She frequently hand wrote the recipient’s name at the top.

These letters comprise the primary source material for this book. Typos and some misspellings are noted as such with (sic) from the Latin “sicut” which means “just as” to indicate how the word appears on the page. She often mistypes “thier” for “their” and frequently fails to put an apostrophe in contractions such as “it is,” but I am not going to note these or change them every time they appear. An occasional editorial (NOTE in parenthesis or merely parentheses) is made within a transcription to explain an otherwise obscure reference she made or to indicate words lost at the bottom of a page or from a hole in the paper. Several letters contain unclear or inexplicable words that could not be interpreted, and an editorial (?) or (sic) indicates this. In order to save paper, most of Elizabeth’s typewritten letters are single spaced without indentations or paragraph separations. This explains why there are none in these transcriptions.

Typewriters are much less forgiving than word processors. Sometimes Elizabeth changes her mind after she has already written. In such cases, where it is clear she crossed something out and made a change, it will look like this example from the July 20, 1945, letter about visiting relatives in Ireland where she writes, “They were really quite pleased to see me.”

For all I know, that was no typo and was done on purpose.

There are remarkable incidents described in these letters as well as historical facts probably never before observed. For example, before going overseas, Elizabeth was stationed at Walter Reed Army Medical Center. She explained how her job brought her into direct contact with wounded soldiers.

“You don’t realize what a war this is until you see these young kids, eighteen and nineteen years old without legs and arms, and more of them absolutely deaf, trying to learn to read lips,” she wrote on August 19, 1943, her third letter that month.

This insight alone, that soldiers were coming home with hearing loss, is a fact not usually made part of the history of WW 2. It is doubtful you will find mention of this in any book on the war, but it is corroborated by one website which described war wounds and noted that, “During World War II, artillery and bombs inflicted the most injuries — and the most severe.”

Among other historic events: In her letter of May 11, 1944, there is a first person account of meeting Joseph Kennedy, Jr., and being his guest at his sister Kathleen’s wedding in London where Kennedy was Best Man. Elizabeth was also spotted by the most famous photographer of the 20th Century, Henri Cartier-Bresson. He photographed her for an article in Harper’s Bazaar. I found the photos, which include one of her, in the March, 1945, issue of Harper’s where she told me to look in her January 21, 1945, letter. Her best friend was Nadine Sachs, granddaughter of one of the founders of Goldman Sachs. In the bar of the Ritz Hotel in Paris, Elizabeth met a relative of Nadine’s, Dr. Harry Plotz, and was hit on by Hemingway.

In that same January letter Elizabeth writes, “We put on a show that is, we had the G. I’s put on a show — and I had beaucoup to do with it — they had a few dances in it and believe it or not I taught them the steps.”

A set of photographs taken by Elizabeth of that musical dance revue performed by our troops in the hospital twenty miles outside Paris have been discovered. Many are reproduced in this volume. They have never before been published.